I am still recovering from the Los Angeles Dodgers 1985 loss to the St. Louis Cardinals. Whoever thought I would be able to confront my past by speaking with baseball hall of famer Ozzie Smith about the moment that brought any true Dodger fan to their knees. 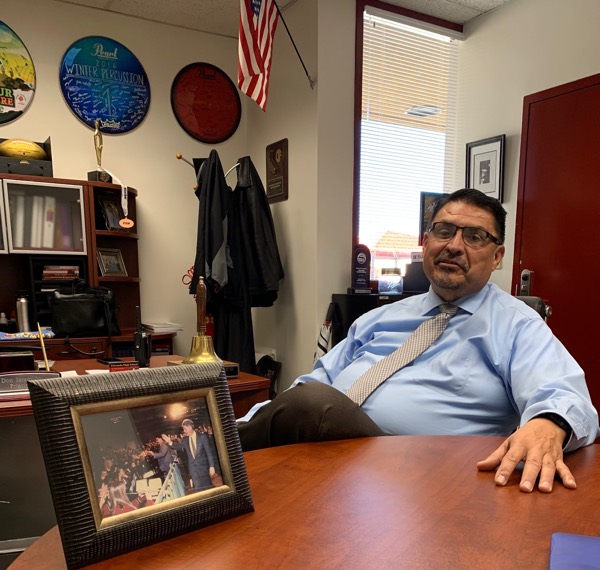 Don Jaramillo hasn’t missed a first day of school in 56 years, as a student, teacher, legendary band director and, for the past seven years, principal at Etiwanda High School.

“Ever since Kindergarten,” said Jaramillo, who will retire at the end of the current school year. “When that first day of school rolls around next year, it will feel very strange. I think about that much more than I do my last day.”

Not that he won’t have plenty to do when teachers and students return to the classroom after the summer break. Between fishing, traveling and giving voice acting a try, Jaramillo will always have his music.

That journey began at age 10 when as a fourth-grader in San Bernardino, he got his first trumpet – an immediately fell in love. Mentored early on by his father – a former Big Band musician – and later by music instructors who quickly recognized his gift, Jaramillo was playing in nightclubs and for sought-after jazz ensembles by the time he was in high school. It eventually landed him at UCLA, though the culture shock proved to be too much and he would later transfer to Cal State Fullerton.

Along the way, Jaramillo fell in love with teaching, as well – inspired by band directors who showed him that inspiring young minds wasn’t limited to reading, writing and arithmetic.

“They were able to get us to think very organically about music, and that unknowingly turned me in the direction of teaching,” Jaramillo said. “Up until then, education wasn’t nearly as important as playing my horn.”

Jaramillo would spend five years as a band director in Baldwin Park, then moved to Etiwanda, where he served 21 years as band director. There, he built one of the most prestigious marching bands in California, with appearances at the Montreux Jazz Festival, the Rose Parade and the Grand National Championships, making the finals in 1992 and finishing fifth in the nation in 1999. But it was the opportunity to play on separate occasions for two presidents (Reagan and Clinton) that stands out for Jaramillo.

“The word of mouth was that we were the best high school band in the region,” he said, proudly pointing to a picture of his band performing in front of a clearly impressed President Clinton.

In 2008, Jaramillo became assistant principal at Alta Loma High – also part of the Chaffey Joint Union High School District, returning to Etiwanda four years later to take over as principal. The leader of the band had become the leader of the school.

“The amazing thing about Mr. Jaramillo is that he was a legend in the band world, then started a whole new career track as an administrator, and had tremendous success with that as well,” said Dr. Mathew Holton, Superintendent of the Chaffey District.

As different as the two jobs could be, Jaramillo saw similarities – most notably, building the right team. His proudest accomplishment as principal is the staff he has put in place.

“It’s about creating a culture of trust and family, and letting them do their jobs,” said Jaramillo, who will be succeeded by his Assistant Principal, Mac Wolfe. “This school will be very good for many years to come, because of the staff we have.”

Handing off his calling card – the “Eagle Pride!” cheer for which he has become so well known throughout the community – might not be as easy. When Wolfe was introduced as the new principal, he and Jaramillo did the cheer together.

“Someone joked that only Mr. Jaramillo can use that line,” the former band leader said with a smile. “I’m sure they’ll figure it out.”